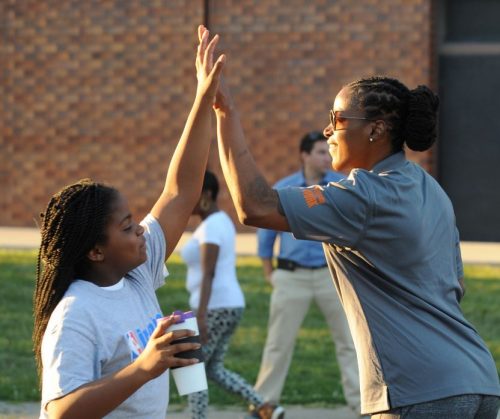 Participating in an after-school debate or a Model United Nations club, or being part of a basketball team are experiences many remember as an exciting foundation of their youth. However, for youth at risk—as are over 75% of school kids who have experienced violence—engaging in an after-school program can be life-saving.  Such programs serve as an alternative escape for many minors who might otherwise face challenging circumstances in their neighborhoods, and sometimes their homes. To tackle these challenges, Girls in the Game has been working since 1995 in the city of Chicago, the initial site of the organization, to empower girls and address the growing concern of violence affecting youth.

Aiming to increase self-esteem, self-worth, address trauma, and non-violent means to resolve conflict through carefully designed projects,  the organization’s programs have reached 50,000 girls since 1995. At the core of each program are sports, wellness, and leadership, and the efforts of Girls in the Game have been met with success in each of these areas. Engaging in a range of sports has proven to improve the participants’ physical wellness, resulted in a shift to a healthier nutritional diet, and created the opportunity for developing leadership skills through their roles in sports. Amira, an alum of the program and an All-American runner, shared that running track has opened her mind.

“I have learned to set expectations for myself and accomplish those goals regardless of distractions.”

She added that she now runs to be a trailblazer for young girls, but also to help them “be good people, stay healthy, stay focused on their goals and strive to be successful in whatever they want to.” Focusing on low-income neighborhoods with higher rates of violence, Girls in the Game successfully assisted 86% of its participants to implement the social-emotional learning and make use of non-violent mechanisms to resolve conflict. Likewise, participants in Girls in the Game programs demonstrated a steep increase in self-worth, self-esteem, determination, courage, and grit.

Building on their success, the organization expanded to new locations and in 2008 added yet another program: the Teen Squad. This program is designed for high school girls that are trained to coach Girls in the Game programs for youth, further strengthening the participants’ grit and desire to give back to the community. Leader-to-Leader is a special feature of Teen Squad, allowing the girls to interview working professionals to learn new fields and establish role models. Makisha is a Teen Squad participant from Denton, Texas. She earned an interview with the Dallas Wings’ VP of Operations, at which point she asked to see and photograph their office, knowing that one day she will have an office just like that. Girls in the Game fights to replicate Makisha’s story among all teens in the community. To reach all girls, including those facing greater difficulties, the organization recently introduced the Teen Club program model in 2017. The Teen Club reaches teens that experienced trauma, live in poverty, and lack access to the daily Teen Squad meetings. This is done in coordination with the school system to fit the Teen Club program during school hours. The addition of this model introduced 65% more teens to Girls in the Game.

In the spirit of supporting the safety and leadership of our future female leaders, girls’ and women’s empowerment has never been more crucial. Thanks to the generosity of CAF America’s donors, Girls in the Game is witnessing growing participation and growing demand in new locations. To learn more, please visit girlsinthegame.org.