Cultivating the Next Generation of Women Leaders 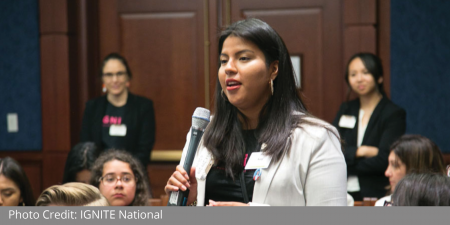 March 8, 2021 marks 110 years since the first International Women’s Day celebration, which is now a global event recognized by the United Nations since 1975. This year the United Nations has chosen the theme, Women in leadership: Achieving an equal future in a COVID-19 world. It is on this day each year when we recognize women’s significant social, economic, cultural, and political achievements and reflect on the troubling reality that we are still a far cry from gender equity. In recent years, women have taken great strides in expanding their presence among elected officials, yet only 22 countries around the globe have women serving as heads of state or government, and in the US Congress, women have only 27% representation.

To address political under-representation in the United States, organizations like IGNITE National are empowering the next generation of women leaders. Through targeted training programs and events since 2010, IGNITE has supported young women across the country to run for elected office. Donors are recognizing the power of this approach, as evidenced by a recent grant from CAF America donors toward IGNITE’s general operations. This funding supports the organizers behind the movement who are able to then move the needle on SDG5, Gender Equality. Beginning with grades K–12, IGNITE implements educational and motivational activities to jumpstart pathways to civic and political leadership. College campuses in 21 states have established IGNITE chapters that organize activities including voter registration drives, policy workshops, and meetings with inspirational women leaders in government.

With 20 primary and secondary school programs and 125 college chapters, IGNITE has a wide reach and continues to expand. Program graduates stay involved with the organization through its vast alumni network and provide mentorship to younger members. Many former participants who have achieved elected office are eager to give back to the program. They often join other alumni to provide workshops and share internship and employment opportunities in the political arena with the IGNITE fellows.

IGNITE also works to increase voter registration and participation. In 2020, the organization prioritized the participation of Generation Z in their first general election. Research IGNITE conducted in partnership with Rutgers University found that members of Generation Z who have participated in IGNITE initiatives vote and engage other women in voting at higher rates than their peers. In the 2018 midterm election, for example, IGNITE members registered people to vote or served as poll workers at three times the rate of their peers.

By encouraging young women to make a difference in our political process, IGNITE’s mission embodies the goal of SDG 5 and demonstrates the fight for equal representation continues to gain momentum.