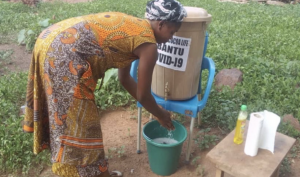 Across the globe, women and girls play a dominant role in areas such as health, sanitation, and caregiving for the young and elderly, work that has become known as the “care economy” and is largely unpaid and undervalued. The care economy is the backbone of the global response to COVID-19 and according to West Africa Regional Director of ABANTU, Dr. Rose Mensah-Kutin, the pandemic has tripled the amount of work performed by women and girls. The pandemic has amplified existing gender inequities, largely due to implementation gaps in gender equality laws and a lack of inclusion of women in decision making processes.

To continue its important work and pivot toward emerging needs, ABANTU is collaborating with a variety of individual and organizational partners. In its transition to online training for sanitation programs, for example, the organization relies on partners in the community who were previously trained to use the internet for this objective. Additionally, ABANTU is delivering support to families in rural cocoa-growing communities by distributing soap, hand sanitizer, and water buckets called “Veronica Buckets” for safe hand washing, which has kept COVID-19 infection rates low in these areas.

As a result of rising cases of domestic abuse, ABANTU has deepened existing partnerships and found new collaborative opportunities with advocacy groups to build awareness about gender-based violence during the pandemic and advocate for women’s inclusivity in decision making at all levels. To further their efforts, ABANTU has partnered with area gender equality coalitions and networks to raise additional funds that allow them to address needs as they arise in the communities, including a donation to the Ministry of Gender for its Hot Meals program to feed women and girls.

The organization initially expected a 20 percent funding decline, but with multi-year grants from two donors and an emphasis on strategic partnerships to deepen impact, ABANTU has managed to survive the downturn in financial support that has plagued many charities.