As Australia reeled under the full brunt of the forces of nature, the world watched in concern. We’ve witnessed many disasters before, but the 2019-2020 Australian Bushfires presented an alarming case of the effects of climate change. The global community mobilized to aid a country in need.

From September 2019 and into the new year, devastating bushfires ravaged the Australian continent, affecting millions of families and indigenous wildlife. The fires, fueled by arid climate conditions amid a record heatwave, affected every state. From the early days of the summer season, temperatures exceeding an oppressive 40 degrees Celsius on average impacted agriculture around the country. Within weeks, these consistent high temperatures combined with one of the most severe droughts on record resulted in bushfires destroying nearly 20 million hectares of land.

With such vast swathes of land consumed by the fire throughout the continent, the final impact of the devastation will be difficult to grasp. One particularly shocking statistic: New South Wales in southeast Australia—the hardest-hit state—saw at least one-third of its koalas killed in the bushfires. According to estimates, about a billion animals and insects perished in these fires and 113 rare species brought closer to extinction, which, sentimental losses aside, will put a terrific strain on areas undergoing regrowth as they are crucial to their ecosystems. To raise the stakes, Australia is one of the most biodiverse areas on Earth (one of 17 “megadiverse” countries). This extreme display of force by nature demanded an equal response.

As the bushfires increased in size and speed, CAF America helped our donors to make tax-deductible donations to charities working in the affected areas of Australia. Donors partnering with CAF America, individuals, corporations, and foundations, were able to make a donation to a restricted fund dedicated entirely to supporting the relief efforts, the Australian Bushfire Relief Fund, or select an organization from our global database of eligible organizations. Our validated charities addressed vital recovery efforts including support for rural firefighters, animal relief, and providing supplies to evacuated families. For a nation in recovery, expert services like those provided by the local NGOs are vital to repairing infrastructure and restoring fragile ecosystems, enabling the country to effectively move forward.

Americans are generous people. In a country built in part by great philanthropists, the spirit of giving lives in each of us. Within weeks of the creation of the fund, CAF America donors gave over $1.8 million to various organizations working in some of the hardest-hit areas.

We are proud of our donors who mobilized so quickly to offer their support, and we are proud to be part of a society that pulls together to help those in need. 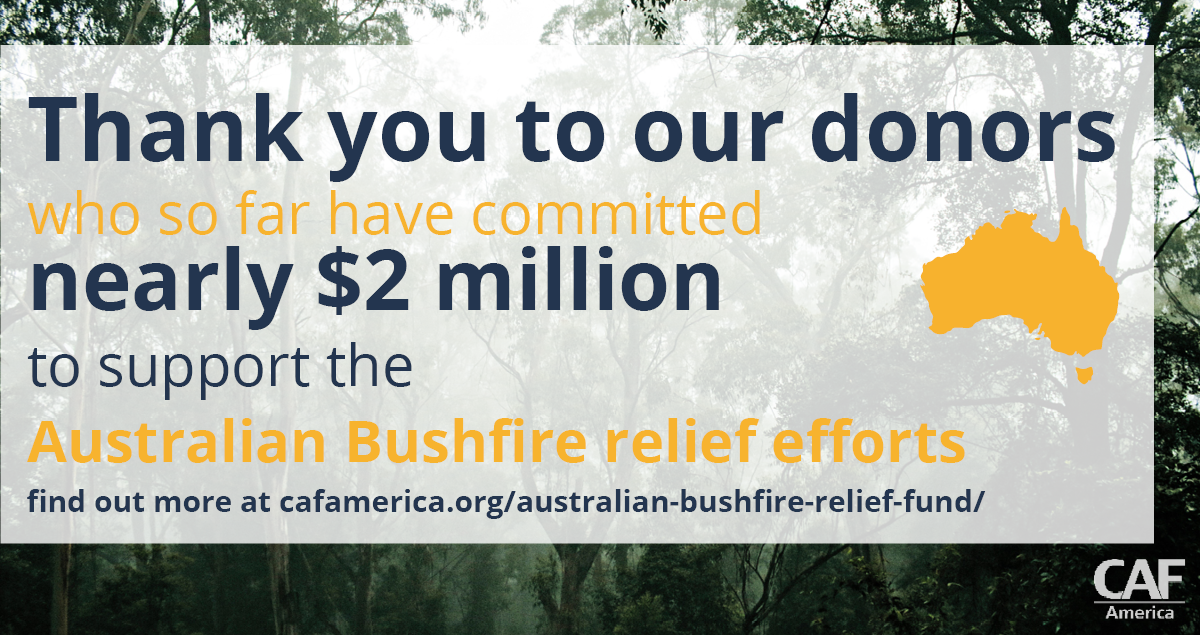