The Sustainable Development Goals: A Plan for 2016 and Beyond 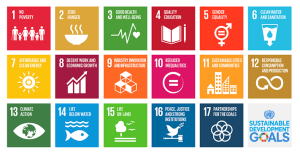 As we find ourselves only a number of days into 2016, it’s the time of year when many of us commit to altering our lifestyles in an attempt to abide bold resolutions.  The beginning of this year, however, marks an important benchmark for humanity itself. The world — under the auspices of the United Nations —  has agreed to a new set of goals that will define the next 15 years of common action towards ending poverty, fighting inequality and injustice, and tackling climate change.

The Sustainable Development Goals (aka SDGs or Global Goals) became reality in September 2015 when world leaders adopted the Post-2015 Development Agenda, which included a list of 17 universal goals and 169 targets. The SDGs entered into effect on the first of January 2016 and were formulated to build upon the Millennium Development Goals (MDGs) – eight anti-poverty targets agreed upon in 2000 with the ultimate aim of eradicating extreme poverty, establishing peace, and a healthy global economy.

While the MDGs fostered notable progress, the SDGs are an acknowledgement that there is a great deal of work yet to be done. As stated by UN Development Programme Administrator Helen Clark: “This agreement marks an important milestone in putting our world on an inclusive and sustainable course. If we all work together, we have a chance of meeting citizens’ aspirations for peace, prosperity, and wellbeing, and to preserve our planet.” So what are the SDGs? Who will fund SDG-related programs? How can we measure success?

What are the SDGs?

Applying some of the lessons learned from the start, the SDGs unlike the MDGs, are the result of a very large public consultation program that began with the Rio+20 Summit in 2012. Over the next 3 years, representatives from over 70 countries — with input from a series of “global conversations” conducted by the UN — hammered out a list of priority areas to be addressed, ultimately resulting in 17 goals being adopted:

Embedded into each of these goals are a number of targets – directives designed to add more specificity to each goal’s intent. Many of the 169 targets may seem intuitive, but their inclusion represents an improvement over issues that some critics took with the MDGs, namely their simplistic nature, lack of adaptation to specific national needs, their failure to address accountable parties, and absence of guidelines for vertical intervention. Furthermore, the MDGs were also deemed too limited in their focus on only developing countries instead of creating a global and holistic approach with buy-in from all types of actors. The Post-2015 Development Agenda addressed these shortcomings by expanding both the list of goals and targets, in addition to focusing more heavily on long-term sustainability rather than short-term impact.

Nevertheless, appeasing all parties remains difficult. Not surprisingly, the SDGs have already received a fair amount of criticism being considered, as too broad and too inclusive rendering solutions difficult to achieve and to measure. In fact, some say that the SDGs are so all-encompassing and ambitious that they are more reminiscent of a “wish list” than a set of measureable goals.

These critiques have merit as they focus in on some of the most challenging aspects around the implementation of the SDGs. In all fairness, it should be noted that others argue in favor of having more goals rather than having important areas such as gender equality or peace and justice left out.

Those who are following the ever evolving conversation around the SDGs will know that beyond these criticisms,  much of the attention is being shifted to perhaps the most damning aspect of the SDGs — you guessed it — funding.

How will the SDGs be funded?

Not surprisingly, the programs necessary to satisfy the SDGs will require a great deal of funding and, as a result, a great deal of cross-sector cooperation. In August 2014, the UN’s Intergovernmental Committee of Experts on Sustainable Development Financing met to discuss roughly how much financial cooperation would be required in order to adhere to the upcoming agenda. The Committee’s estimates were eye opening. Taking a look solely at Goal #9, it is estimated that an annual investment of $5 to $7 trillion would be required for necessary infrastructure improvements in the water, telecom, agriculture, power, transport, buildings, and industrial sectors.

While the Addis Ababa Action Agenda has reinforced the role of governments and corporations in implementation and financing of the SDGs, the philanthropic sector was also recognized as an important contributor to development: “There is increasing recognition that including foundations more strategically in policy discussions at the global and the local levels will help optimise development results. This will require a paradigm shift in how governments approach foundations, embracing them as catalytic partners rather than solely considering them as financiers”.

The philanthropic sector played a considerable role in the MDGs. Notably, some of the biggest successes — such as declining rates of malaria —  were achieved through the efforts of philanthropic actors. The SDG Philanthropy Platform gives the number for MDG funding by foundations to be around $30.6 billion dollars. This number is expected to swell dramatically with the implementation of the SDGs and a more inclusive process that has called upon public and private partnerships to tackle these global issues.  But as some have already stated, it is important for foundations and charities to not only be seen as a source of money, but rather be recognized as innovators who are able to contribute in various other ways to the SDGs. More on this in our future publications.

How to measure progress?

While the MDGs had detractors, there is near universal agreement that some of its key goals were met by 2015 – namely a 50% reduction in the poverty rate and a marked increase in the availability of primary education. More ambitious goals, such as those related to public health in Africa, fell short of their 2015 targets. The SDGs represent an evolution in thinking relative to their predecessors in that not only do they go beyond meeting basic human needs, they contain a built-in monitoring mechanism intended to avoid the pitfalls experienced by the MDGs. In order to construct this safety net, the UN created the Inter-Agency and Expert Group on SDG Indicators (IAEG-SDGs). Following March 2016, the deadline set for the indicators to be put in place, the IAEG-SDGs shall provide technical support for the implementation and monitoring framework through 2030, offer progress reports on a global scale, police the use of agreed upon indicators, and serve as a resource for capacity-building activity.

As was said above, the SDGs call for all sectors and actors to get involved in their fulfillment. Situated at the intersection of the three sectors, CAF America plans to keep tabs on this exciting and evolving dialogue and keep our clients, donors, and partners informed of the developments.