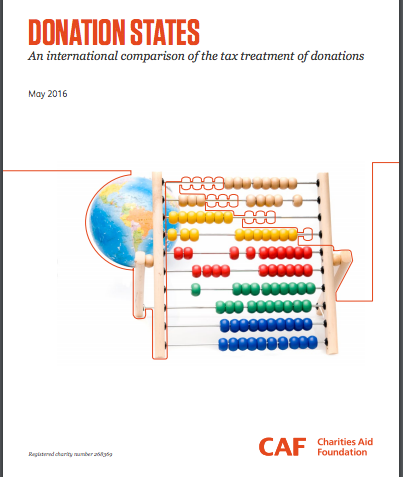 Tax incentives encourage people and businesses to give more to charity but are too often skewed in favor of the wealthy and causes favored by governments, an international study has concluded.

People are significantly more likely to have given to charity in the past month if they live in a country which offers tax relief on donations than if they live somewhere which does not, according to a report by the Charities Aid Foundation, our partner office in the UK.

Donation States – An international comparison of the tax treatment of donations – a study of 26 developed and emerging economies – compares the way tax incentives for charitable donations are offered across the world.

The report found that incentives are widely used by governments to encourage giving to charity, and help drive up both the number of people giving to good causes and the value of donations.

But it warns that regular basic rate taxpayers often have less access to generous incentives than wealthy people and companies. In some countries excessive red tape creates major barriers to people on moderate incomes taking up tax reliefs at all.