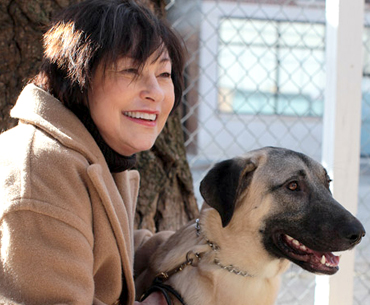 In the spring of 2010, Vana Ingram was reading her local newspaper when she saw a picture of a dog being greeted at the airport by a soldier’s wife. The soldier was still serving in Afghanistan, but he sent his dog ahead to be with his wife until he came home. For Ms. Ingram, that photograph was a call to action, and the it was the first step in her process of creating the Soldiers’ Animal Companions Fund (SAC Fund).

With a little research Vana learned about Nowzad Dogs, a registered charity in the UK that does incredible work with stray dogs and cats in Afghanistan. Currently Nowzad Dogs has the only government-authorized shelter in Afghanistan, where they care for dogs, educate locals about animal welfare, and even have a few local adoptions.

Initially, Ingram wanted to set up an auxiliary Nowzad Dogs in the U.S., but the expense and the extensive work involved was overwhelming. She also did not want to detract from the work Nowzad Dogs was doing, but she still really wanted to support it.

Ingram went online to find other options, and she discovered CAFAmerica’s Donor Advised Funds (DAFs). A DAF allowed her to pool gifts from multiple donors and set up continuous financial support for Nowzad Dogs. Another benefit was that donations through CAFAmerica’s DAF were tax deductible for American donors in the U.S., which Ingram said helped encourage donations.

Perhaps one of the greatest benefits of the DAF is that it has allowed Ms. Ingram to be flexible and partner with other charities, such as War Dogs Making It Home. While many Nowzad dogs go to their soldier’s home or a sponsoring family, some Nowzad dogs go to Chicago to work with veterans suffering from PTSD at War Dogs Making It Home. Kala, a Nowzad rescue who Ms. Ingram fondly calls her “poster child,” was paired with a veteran who had completed six tours of duty in the Middle East.

The SAC Fund has been quite successful, considering Ms. Ingram is one of a three-person team that started just three years ago, and they have done little or no marketing.

“Amazingly, we have been found,” said Ms. Ingram. People from all over the world visit the Soldiers’ Animal Companions website, and she is consistently surprised by the support from different parts of the United States.

“It’s been almost three years and I still have all this enthusiasm,” she said. Ms Ingram, who is a retired dog trainer, pays out of her own pocket to fly to the East Coast, Chicago, and anywhere she can go to welcome Nowzad rescues home. “Lars (one of Ingram’s co-workers) keeps telling me all the time that I have to calm down,” said Ingram, “And I have to always remind myself — this is not my dog.”