Preserving our Waterways for Tomorrow 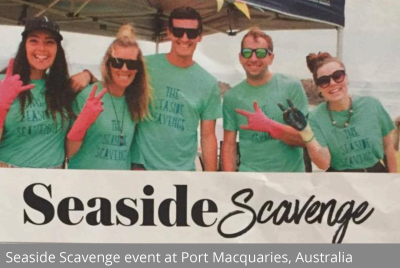 There are an estimated 5.25 trillion pieces of plastic in the world’s oceans. With single-use bags found even in the depths of the Mariana trench, the deepest sea floor, no place is untouched by our inorganic waste. Plastic is an enormous threat to marine mammals, causing starvation, drowning, infection, and entanglement. Many species of fish are also at risk because of ocean pollutants, ingesting plastics and microplastics that then enter the food chain, impacting anything—or anyone—who consumes it. As the flow of waste and the resulting pressures on marine ecosystems accumulate, the calls from concerned global citizens rise too, asking leaders to take a stand.

In the absence of effective public sector leadership on the issue, nonprofit-organized cleanup efforts are getting more creative. Based in New South Wales, Australia, Seaside Scavenge hosts volunteer cleaning events in Australia, England, and South Africa where the litter collected off beaches and waterways becomes currency. At the conclusion of each event, volunteer participants are able to trade the collected waste for commodities at a community pop-up market. By engaging local business, community groups, musicians, and other volunteers for support at its events, Seaside Scavenge is raising awareness on the issue, turning waste into a resource of value, and promoting alternatives for conscious consumerism. The organization also focuses on river and stream health, which is integral to our agricultural systems and clean drinking water.

In 2019, at their most successful cleanup to date, the organization held an event 250km inland from the Australian coast where 93 volunteers removed 750kg of litter in four hours. CAF America donors have supported a total of 13 events at which 1,409 volunteers have removed 2,427kg of waste from shorelines—including 65,294 cigarette butts and 553kg of recyclable materials. A testament to the growing visibility and awareness of the challenge for Australians, over 80% of these volunteers had never attended a clean-up prior to joining Seaside Scavenge. After each event, all litter data is sorted and documented on the Tangaroa Blue ‘Australian Marine Debris Database,’ which is then used by Seaside Scavenge to influence consumer behavior choices through waste awareness activities.

As the oceans face ever-increasing pressures from our linear economic system of consumption and waste, Seaside Scavenge is fighting a consequential battle to preserve marine resources for future generations. As the momentum builds, the hard work of organizations like this are contributing to reversing the tide on marine debris.