Indigenous Women in Guatemala Lift Themselves Out of Poverty 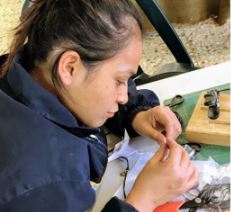 Guatemala is the most populous country in Central America. More than half of all Guatemalans live in poverty. A similar percentage of the country’s residents are under age 19. In such an environment, young women are disproportionately vulnerable, especially if they are part of a historically persecuted indigenous communities.

In communities primarily of Maya descent, poverty rates average 79%. In the same communities, 40% live in extreme poverty. In this climate, nonprofits can play an important role in improving access to jobs and education, and providing social support for the most vulnerable.

Prevalent marginalization of minority indigenous groups today can be traced back to Spanish conquest and colonization in the 16th century. Guatemala finally gained independence in 1821; however for the next century, the country experienced civil and social strife. A long string of dictatorial rulers and a bloody civil war which lasted thirty six years led to the genocide of thousands of indigenous people. The prejudices left behind last until today.

Many young indigenous women still struggle to find employment and escape the cycle of poverty. Beyond being victims of prejudice, these young women are confronted with language barriers, complete lack of access to education, and one of the highest teen pregnancy rates in Latin America.

Gracia Inc. works with abused and abandoned indigenous girls and women, so they can learn to empower themselves both economically and socially. The organization supports and draws from Casa Hogar—a temporary home that can accommodate up to 110 young women. The home provides a safe place for these women to take refuge, while also allowing for the residents to participate in Gracia Entrepreneur Training (G.E.T) programs made available through the organization’s social enterprise, Milagros Jewelry.

The residents are trained to manage all aspects of the business, including logistics, inventory, marketing, and sale of Milagros products. With these highly transferable skills, the young women are well-equipped to be hired in a similar job function or to one day start businesses of their own. The G.E.T program integrates three distinct components: the G.E.T. Classroom, the Milagros Workshop, and Las Mujeres Fuertes (The Strong Women).

The G.E.T. classroom is held in lecture format, enabling the young women to develop their literacy and financial skills in a classroom setting. Business examples from Milagros Jewelry are discussed, synergizing lessons learned with practical applications. At the Milagros Workshop, handcrafting skills are honed as the young women create Milagros jewelry. Profits from jewelry sales become a source of income for the artists. The Las Mujeres Fuertes component of the G.E.T Program acts as a cohort which allows participants to openly discuss the challenges of poverty and abusive environments. However, it also serves as a forum for identifying potential business ideas to be put in practice after leaving Casa Hogar. The young women not only get a chance to share and heal, but also develop leadership and problem-solving skills in the process.

Maria is one of the women who benefited from joining the G.E.T Program. She grew up in a home with eleven siblings where abuse was often fueled by alcohol. Fortunately, with her aunt’s help, Maria was able to escape to Casa Hogar, where she lived for ten years. It was here that Maria began her journey towards success. Using the skills she developed making jewelry and accessories at the Casa Hogar, Maria was able to secure a one-year employment contract within the Gracia organization. Later that year, Maria walked into a store and bought a pair of new shoes. For the first time in her life, Maria owned something which she was able to buy herself.

By empowering young indigenous women with the knowledge, skills, and confidence to be self-sufficient, Gracia Inc. works towards ending the cycle of social and economic disadvantage in which many young Guatemalan women find themselves today.

What are some impacts you have made as an organization that you are proud of and would like to highlight further?

Gracia is proud to have expanded its reach to the younger girls living at the Casa Hogar where we work in Jalapa Guatemala. We will begin working with the youngest residents of the Home, Las Chicas Valientes.

Las Chicas Valientes (“Brave Girls”): 15 girls, ages 10y-15y. Las Chicas Valientes are permanent residents of Casa Hogar. Most do not have homes; all are facing lives apart from their families of origin. While too young to be in the Workroom, they can participate in ¡Adelante! Las Chicas ages are perfect for assimilating essential skills, resilience, and self-efficacy which will prepare them for futures in the Workroom and benefit personal lives.

“¡Adelante!”: Fútbol for Development: “Adelante” means forward or onward. Using research drawn from the World Bank, United Nations, and the Population Council, “¡Adelante!” uses fútbol (aka soccer) to develop leadership, essential skills, and self-efficacy. On the field, Las Mujeres Fuertes, Aprendices, and Chicas Valientes learn the value of sustained practice/effort, respect for rules, teamwork, accepting diversity, and empathy as they put essential skills, like communication, into practice. They carry these skills off the field and continue to use them in the Workroom and their daily lives. ¡Adelante! is divided into four focused, interconnected, and progressive learning modules to be delivered over four years. Modules: Confidence, Character, Connection, and Competence.

Has the focus of our organization changed? If so, how and why?

Gracia is proud to be a research informed organization, and as such, we have planned program supported by the most recent research from credible institutions. Originally, we had planned to operate as a launch pad program: after 3-4 years in the Milagros Workroom, the young women would graduate and move on. However, the 10 year drought in the Dry Corridor (where Jalapa is located) has decimated jobs and opportunity. We have now shifted to focusing on growing jobs via sales, educating more young women in business skills & financial literacy and developing leadership and agency. The last two are critical in patriarchal Guatemala. As above, we have also committed to working with all age groups at the Home. World Bank and Population Council research demonstrates that when young women acquire soft/essential skills, leadership and agency at a young age, they perform better in the workplace later in life.