Fighting for SDG 14 | Life Below Water 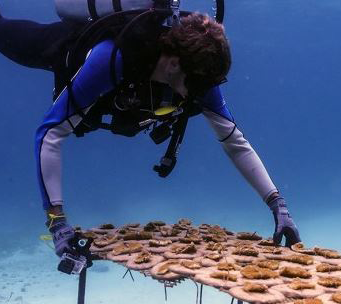 The clear waters of the Dominican Republic attract over 6 million tourists every year to the island of Hispaniola; the second largest and the most diverse Caribbean nation. The Punta Cana region, in particular, is the area’s fastest-growing tourist destination. Perhaps predictably, the surge of tourists, overfishing, and habitat destruction of the coastal region are threatening the coastal resources of Punta Cana. For many in the community, the sea is a way of life and their livelihoods depend on it.

As one of the more dynamic problems faced by conservationists in the region the clash between the tourism industry—which accounts for nearly 8% of the country’s GDP—and the need to protect the region’s coasts which have already been negatively affected by climate change remains a constant battle. Ocean pollution and sedimentation, which stems from onshore development, damages underwater resources like seagrass beds, mangroves, and coral reefs. In fact, with coral reefs being home to over 25% of the planet’s marine species and important barriers against coastal erosion, the preservation of these natural structures have become a top priority for the Foundation.

In order to sustainably restore and protect these resources, the Puntacana Ecological Foundation involves the local residents by providing training for sustainable-sector jobs and alternative methods of income as a way of changing harmful practices into positive contributions to the environment and coastal ecosystem. Participants who join the Foundation’s programs are able to enhance their existing skills to achieve alternate and sustainable income generating opportunities while also helping the Puntacana Ecological Foundation to carry out its mission of conservation and preservation. Local fishermen are involved in SCUBA and coral restoration classes while local artisans involve themselves in the fight to rid the Caribbean of an unwanted visitor: the invasive lionfish. With the region’s ecosystems under attack on several fronts, it takes ingenuity, resourcefulness, and dedication to turn the tides.

More specifically, the Foundation, in partnership with the University of Miami, developed and maintains “coral gardens”. These gardens—composed primarily of Staghorn and Elkhorn—are propagated from existing coral and mounted onto steel frames as the corals regrow. Once complete, the corals are planted back into the reef. Importantly, this process is carried out by local fisherman taking part in the Foundation’s alternative income programs, with boat operators, captains, divers, and coral gardeners all taking vital roles in the program.

Another program funded by CAF America donors uses local artisanal artists in the battle to rid Caribbean waters of the invasive lionfish. The lionfish, which destroys coral reefs and local fish populations, was recently introduced to the region from the Indo-Pacific.  The Foundation, which also encourages local restaurants to catch and eat the fish, trains local women in the art of taxidermy.  The taxidermied lionfish are then sold in the Dominican Republic and around the world as souvenirs through the Artisan and Marine Services Association (ARSEMAR), a local association created to help diversify the income of fishermen and family members plus low-income local artisans.

The health of our oceans remains compromised; climate change and the tourism industry remain significant factors in jeopardizing the delicate ecosystems within. Nonetheless, small but meaningful efforts like those of the Puntacana Ecological Foundation will slowly but surely transform life below water.