Empowering Children Affected by War through Education and Arts Programs 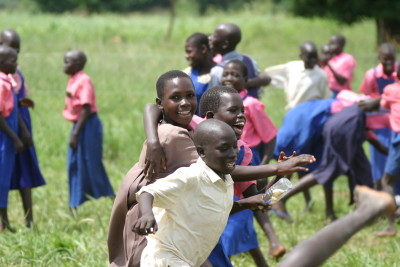 Ten-year-old Hussein was one of 70,000 refugees living in a small and crowded refugee camp in the south of Lebanon. Lack of space, limited resources and few schools forced Hussein and thousands of other children to work at the camps instead of attending school. A raging war and armed militias surrounded the refugee camps and these became the conditions that Hussein knew as reality.

In the Democratic Republic of Congo, twelve-year old Papy was recruited as a child soldier by one of the many armed groups operating in the region. Like others attempting to survive in a war-ridden country, Papy and his family struggled to make ends meet. When his parents could no longer afford to pay school fees, Papy dropped out of school and he became an easy target for these armed groups. During their time in the armies, Papy and other child soldiers were forced into using drugs which became a regular habit in order to cope with their situation.

In an effort to assist children like Hussein and Papy, the international charity, Stichting War Child, works with children in areas experiencing conflict by providing a safe haven, and offering educational and psychosocial resources.

Today, Hussein and Papy are both back in school. Hussein took part in War Child’s literacy and numeracy classes, enabling him to develop a solid academic foundation before starting primary school.  Papy, now fifteen, entered sixth grade at one of War Child’s education centers, and plans on attending college and becoming director of a primary school, to give other children the same opportunities for a prosperous future.

Founded in 1993, War Child was created when Willemijn Verloop, a social entrepreneur from the Netherlands, traveled to the Balkans at the time of the Bosnian War. There she met music professor Nigel Osborne, who, in the midst of the fighting, ran musical workshops for children in the bomb shelters of Bosnia. From the very first visit, Willemijn was convinced of the benefits of this approach for young survivors of conflict. The Bosnian War had disastrous effects on children, making them withdrawn, scared, and distrustful; however, the musical workshops offered the children a cathartic and safe place to express fears and confide in the adults around them.

To finance the workshops, Willemijn organized fundraising events in the Netherlands, with great success. As support for War Child’s mission grew, War Child was able to increase the number of activities offered, and also expanded into more countries affected by conflict. In addition to psychosocial assistance, education and child protection became key thematic areas in War Child’s projects.  War Child is now active in eleven countries affected by war.

In 2013, the Cisco Foundation, one of War Child’s strategic partners and donors, recommended that War Child seek grant eligibility with CAF America, to enable War Child to receive funds from US donors.  Since its establishment, War Child has made an essential and lasting impact in the lives of children and young people affected by armed conflict. War Child has achieved the following objectives:

War Child also partnered with UNICEF in 2002 to aid children affected by war, especially child soldiers. UNICEF supports War Child’s on-going efforts to meet the protective, educational and psychosocial needs of hundreds of thousands of Syrian refugee children and vulnerable school-age Lebanese children. In South Sudan, UNICEF co-funded the innovative Connect.Teaching project, which strives to improve the quality of education in primary schools. In Sudan, UNICEF provides funding for the e-Learning initiative by transforming the delivery of education during emergencies. In early 2015, UNICEF selected War Child’s e-Learning platform as one of five finalists in a global partnership for innovations in education.

However, even with successful program initiatives, War Child experiences continual challenges because of its presence in war-afflicted areas and unstable countries. Security risks make it difficult for War Child to continue programs without adequate resources and trained personnel, and the organization requires donations to ensure their programs continue to support children affected by war.

“Children have the right to grow up in peace, free from fear and violence, to develop their full potential and become the person they want to be. I find it motivating to see what difference we can make in the lives of individual children who have experienced violence, danger, exploitation, fear or the loss of family members. We support these children to regain their confidence and build positive relationships with their peers, families and wider communities,” said Saskia van der Kooy, Programme Advisor for Foundations at War Child.