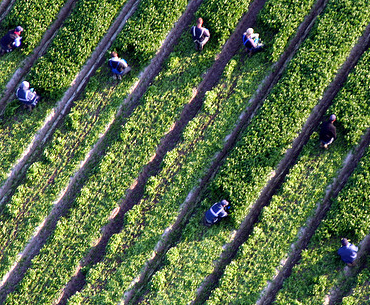 Cargill is one of CAF America’s partners in global philanthropy, working to address the complex challenge of feeding the world while at the same time protecting the planet.  This story is featured in recognition with Cargill’s participation in the Day of International Giving held on December 10, 2013. Read more about the Day of International Giving here.

When people think of countries that experience food insecurity, chances are they tend to focus on third-world, developing countries such as Bangladesh, Ethiopia, or the Philippines. They certainly don’t think of a country that has been ranked one of the wealthiest in the world, with the eighth highest income per capita globally and one that is the eleventh highest ranking in the Human Development Index. It ranks among the highest in international measurements of education, government transparency, civil liberties, quality of life, and economic freedom.

Despite this country’s’ strengths, Canada continues to struggle with ensuring its households can put food on the table. Food bank use in Canada remains higher today than it was before the recession began, almost five years ago.

A recent report put out by Food Banks Canada shows that on average, 900,000 Canadians visit a food bank every month. Of that, 299,000 are children. What’s most alarming is that in the past year 14% of Canadian food banks ran out of food and 60% had to cut back on the amount of food provided to each household. This is the reality that exists in Canada and is something that Cargill is committing to seeing change. As a company dedicated to nourishing people, Cargill saw an opportunity to support where it is needed the most- in its own communities where its employees and customers live and work.

For years now, Cargill has been supporting the food bank network in Canada in various capacities: food drives, product donations, volunteer support, and financial gifts. Last June, a Cargill community in Southern Alberta with the largest number of employees in Canada was hit the most devastating flood in it had ever seen, forcing thousands of people to evacuate their homes and find shelter in nearby communities, evacuation camps or emergency shelters. With only minutes to gather their belongings, most families did not know when they would be able to return to their homes, their jobs, or where their next meal would come from.

Within hours of reaching High River, Alberta, the flood crashed through the town, leaving some areas under 10 feet of river water. High River’s food bank was located on one the streets that was hit the hardest. All of the food that stocked its shelves was washed away and the new industrial-grade refrigeration and cooler units that Cargill had just furnished them with (in order to allow them to properly store and offer fresh meat, dairy, and produce) were destroyed. It would be months until the food bank could re-open its doors.

The majority of weekly food bank users are still living in the evacuation camps that were built in the weeks following June’s flood. There was an immediate need to ensure these people could have access to safe and nutritious food again and Cargill did not hesitate to jump into action. While donations from Cargill employees across Canada were pouring in, the need to support the community and the local food bank was greater than what had been collected so far. Had it not been for the support of Cargill’s global partnership fund and the match that we were able to receive from CAF America, our support to the Alberta Food Banks Network Association wouldn’t have been made possible. Thanks to their generous support, the food bank in High River is just about ready to officially reopen its door, just in time for the holiday season. The $74,000 gift from Cargill and CAF America not only allowed the food bank to fully restock its shelves, but to also purchase and reinstall the cold storage units Cargill had provided for them just a few years ago.

In addition to supporting the food bank network throughout Canada, Cargill has also been addressing the fact that more and more children in Canada arrive for school in the morning on an empty stomach. Without the basic building blocks like proper nutrition to start the day, concentrating in school is a challenge that more and more children face. Since 2011 Cargill has been partnering with Breakfast for Learning, a not-for-profit organization that works to ensure all children and youth in Canada attend school well nourished, improving their ability to learn, and giving them the best chance of success in life.

It is thanks to Cargill’s global partnership funds program that collaboratively, Cargill locations across Canada are supporting over 4000 breakfast programs, feeding over 440,000 children. To date, Cargill has donated over $300,000 to Breakfast for Learning and its Cargill Cares councils in Canada have also given back countless volunteer hours at the schools helping to prepare and serve breakfast for the kids.

And the momentum continues to grow.

About Cargill
Cargill provides food, agriculture, financial and industrial products and services to the world. Together with farmers, customers, governments and communities, we help people thrive by applying our insights and nearly 150 years of experience. We have 142,000 employees in 67 countries who are committed to feeding the world in a responsible way, reducing environmental impact and improving the communities where we live and work. For more information, visit Cargill.com and the News Center.
About Cargill and Food Security
As a company dedicated to being the global leader in nourishing people, Cargill is working to address the complex challenge of feeding the world while at the same time protecting the planet. Cargill advocates for policies that let markets work and enable farmers to thrive; helps expand access to food, improves nutrition and pursues partnerships to end hunger; and works to increase agricultural productivity and incomes while ensuring responsible use of natural resources. Over the past five years, Cargill has contributed more than $81 million to reduce hunger and improve nutrition globally.