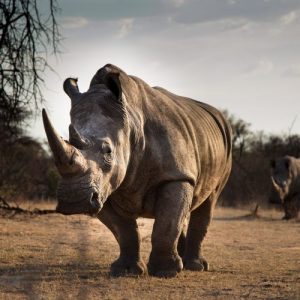 The third-largest land mammal on Earth is in danger. All five species and subspecies of rhinoceros—the White, Black, Greater One-Horned, Javan, and Sumatran—are considered endangered in the wild. An ancient animal whose lineage can be traced back millions of years, rhinos are critical to their ecosystems as some of the largest grazers on earth and help to shape the landscape in which they live. Today, there are an estimated 29,000 rhinos alive in the wild despite conservation efforts.

As is well known, rhinos have long been victims of the black market, where their horns are sold for ornamental and supposed medicinal purposes. The main customer base has, historically, centered around South East Asia—Vietnam in particular—where the horns can be nearly worth their weight in gold. There is hope that some initiatives to counter the illicit trade may be working; in particular, the flooding of the market with imitation rhino horns has, at least for now, reduced some of the demand.

A seldom-mentioned collateral toll of poaching is the amount of rhino orphans it leaves behind. Without a mother or herd to care for the young, they are exposed to the elements and stand little-to-no chance of survival on the African plains. Rhino Revolution operates a center in Limpopo South Africa to aid in anti-poaching and Greater-Kruger region conservation & protection efforts, including the adoption of orphaned rhinos.

Funds from CAF America donors helped enable the organization to successfully adopt and rehabilitate five orphaned rhinos at their Orphanage and Rehabilitation Center. A testament to the success of the program, all five rhinos were successfully released back to the wild in 2017. This incredible achievement made Rhino Revolution one of the first orphanages in South Africa to successfully release orphaned rhinos back into the wild as self-sustaining individuals. Since then, two new orphaned rhinos have been adopted to begin the rehabilitation and re-wilding process. A portion of the funds support world-class veterinary and security staff who will care for the youngsters through their development.

It’s of paramount importance to the ecosystem that orphans do not return to the wild “domesticated”. At the Center, therefore, the rhinos experience minimal human contact after their trauma, and are kept from the public eye to avoid any interference in their development. Typically, at the age of approximately three years, the orphans will leave the organization’s highly-secure Blue Canyon Conservancy to a nearby protected area free of territorial wild rhinos. When they are deemed mature enough, the orphans will be ready to join the wild rhinos of the conservancy. 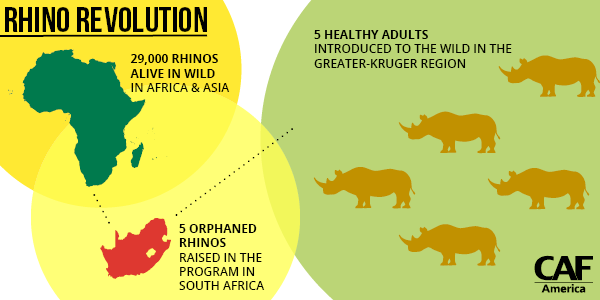