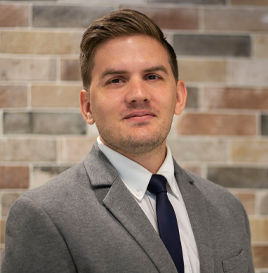 Tucker holds a BS in Political Science with a minor in International Relations from the University of Utah. He is certified in Anti-Money Laundering (AML/CFT) by the Society of Tax and Estate Professionals (STEP).

Prior to his time at CAF America, Tucker interned at various nonprofits, where he assisted programs that provide support to refugees resettling in the United States.

What inspires me to do what I do
I find inspiration through trying to be a part of something that is bigger than myself. In the past I have worked with refugee populations that had recently arrived to the United States. The ability to work with these groups, or any charity, keeps me motivated to work towards improving the lives of other people that are in need.

Random Fact about me
I worked as a river guide in the Grand Canyon for a few years.

Guilty Pleasure
I have been known to binge on Netflix.

Something someone would be surprised to know about me
I have moved over fifteen times in my life to six US states and five different countries.

If I won a million dollars
I would pay off any remaining student debt and then spend six months biking across Japan.