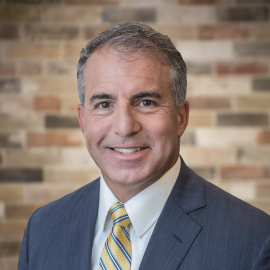 Bill has more than 20 years of executive, financial, and operational leadership experience managing global multi-million-dollar programs. His expertise and international perspective as a retired United States Marine Corps Colonel combined with his strategic approach to operations complement our strong performance-oriented culture. Bill began his Marine Corps career as a helicopter pilot flying AH-1W Super Cobras followed by diverse operational and staff assignments around the world to include the command of a Marine Light Attack Helicopter Squadron and a tour in the United Kingdom with the British Royal Marines.

He brings a dynamic combination of leadership and passion for building resiliency within communities, which is evident throughout his professional career. In his previous position as CFO, Treasurer, and Vice President of the Navy-Marine Corps Relief Society, he managed over $200 million in funds for a non-profit military aid society dedicated to assisting Sailors, Marines, and their families in financial need. In his last military assignment, he managed a $170 million investment portfolio of over 300 science and technology projects for the Office of Naval Research.

Bill earned a Master of Science in National Resource Strategy from the National Defense University, a Master of Business Administration (MBA) from Boston University, and graduated cum laude from Tufts University with a Bachelor’s degree in International Relations. Over the years, Bill has greatly increased his knowledge and appreciation of globally supported humanitarian efforts as a term member within the Council on Foreign Relations and as a Seminar XXI Fellow with the Massachusetts Institute of Technology. In his  leisure time, he is an avid youth mentor and has coached youth baseball and basketball as well as a certified baseball umpire. He enjoys mentoring young people to advance their personal development as leaders.

Get in touch with me at bill@cafamerica.org