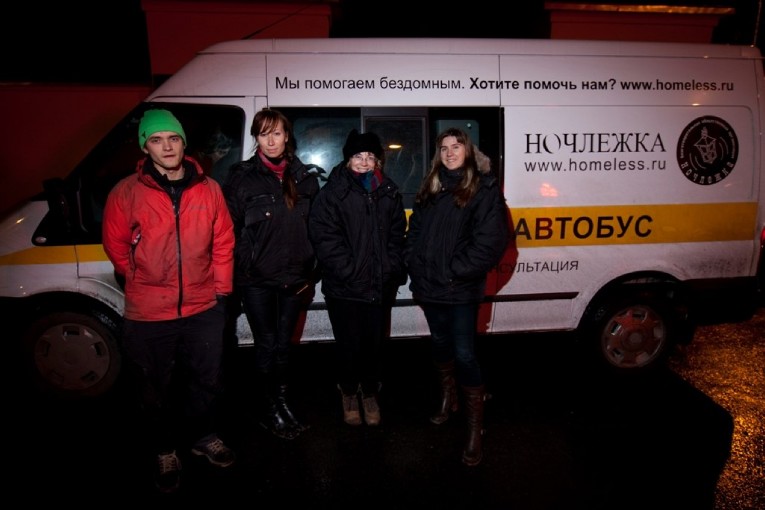 Nochlezhka is a rehabilitation center in St. Petersburg, Russia, that provides holistic services for homeless men and women. The organization, created in 1990 and functioning as a certified charitable organization since 1997, was conceived by a group of compassionate individuals concerned about the situation of the homeless in their city. Since, it has evolved to become a strong advocate for the rights and well being of homeless people in St. Petersburg and in Russia writ large. But Nochlezhka’s mission is not limited to advocacy, its impact has been far more widespread and it has tangible effect on the lives of the men and women who live on the streets of a city that has an average temperature of -8℃ (about 17℉)  in the winter months.

With over two decades years of experience helping the underserved and the homeless in St. Petersburg, Nochlezhka has expanded their services to include: humanitarian assistance, social counseling, defending rights, serving as a platform for sharing experiences and sharing experiences, and being a voice for the homeless. One of the most notable projects within the organization’s humanitarian efforts is their now famous “Night Bus” which will drive around the streets in the cold to distribute food, warm clothes, and medical care. In 2014, the “Night Bus” served 120-200 people a day, resulting in over 25,000 hot meals served in that year. According to official statistics,  2,198 homeless people died on the streets of the city in 2013, with over half of deaths occurring during the winter. To help fight off the cold and prevent potentially deadly conditions, Nochlezhka has also set up heating tents to keep the city’s homeless warm in the frigid winters. But Nochlezhka goes further than providing food and warmth, they actively seek to help homeless to reintegrate into society.

Perhaps most important and impressive is the organization’s commitment to rehabilitation. With the help of Nochlezhka’s social workers and lawyers, over 60% of the individuals who sign up for the service rejoin society by finding work, reconnecting with their lost family, or recovering their homes.

Today, Nochlezhka is seen as one of the greatest success stories for finding ways to deal with homelessness, to create opportunities for those affected to rebuild their lives, to reintegrate into society, and to have access to medical services. The organization’s staff participates in dozens of conferences worldwide aiming to share their experiences, lessons learned, and stories of success and failure with like-minded professionals. If there’s any singular message that Nochlezhka wants to remind us, it’s that “the concept of ‘us’ versus ‘them’ should be eradicated and people should come to understand that any one of us can find ourselves in these difficult circumstances.”