“Just Charity”? The Nexus of Impact, Philanthropy, and Investment in the African Context

When we decided that we should take a closer look into U.S. giving to Africa, we were confronted with a troublesome specter called generalization and the looming notion that we would join the ranks of those who talk about Africa as a homogenous nation and not a complex continent with 54 distinct countries. Alas, with great humility, we have cautiously attempted to establish a few insights about the state of U.S. philanthropy in Africa and some of the challenges and realities it faces.

The state of contemporary philanthropy is such that a single foundation can account for over 70% of all philanthropic funding to the entire continent. Said foundation is of course the Gates Foundation, which in 2012 alone made over $1 billion in grants to Africa. With dedications of $500 million to the Global Fund to Fight AIDS, and Gates’ well-known causes such as eradicating malaria and tuberculosis, the foundation has made a lasting impact throughout the continent. 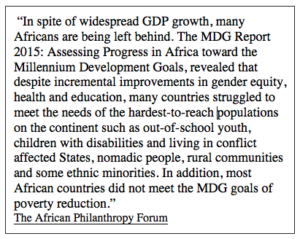 However, Gates is not alone in its commitment to tackling many of these complex issues. According to the 2015 report “U.S. Foundation Funding for Africa”, U.S. foundation giving to Africa grew at twice the rate of overall international giving between 2002-2012, accounting for “25 percent of international grant dollars in 2012”. Other notable organizations that give extensively to the continent include: Ford Foundation ($60.3m), Rockefeller Foundation ($26.6m), Open Society Foundations ($24.7m), Howard G. Buffett Foundation ($24.4m), and many other private foundations. Many of these foundations choose to fund international coalitions or organizations, such as the World Health Organization, which has extensive programs throughout the continent. Others have their own programs that they fund from their U.S. headquarters. While private foundations receive the majority of attention in terms of U.S. giving to Africa, 501(c)(3) public charities that sponsor donor advised funds and U.S.-based nonprofits that have operations in Africa are also leaving a significant imprint and should be represented in future research. Such organizations often tend to target grassroots organizations and social enterprises throughout the continent in lieu of international NGOs.

Beyond looking at who gives to Africa, what is perhaps even more interesting is to see who receives this funding. While much of the media attention surrounding giving to the continent is largely shaped around ambitious missions, such as eradicating malaria and other diseases, if we solely focus on in-country recipients a different area of focus emerges from the report — agriculture. If we do the math, taking the top fifteen recipients headquartered in Africa, nearly $102 million dollars out of $196 million went to organizations that work in agriculture. One of the reasons behind this predominant focus on agriculture could be the Alliance for a Green Revolution in Africa (AGRA), which was launched by Gates and Rockefeller and has received further support from the Mastercard Foundation and the Buffett Foundation.

In summary, the main social issues addressed through foundation funding include health (combating diseases such as HIV/AIDS and malaria), sanitation (providing safe and clean water), hunger, family planning (promoting healthy sexual behavior and testing), and institutional capacity (improving rule of law and governance). When looking at the recipients of this funding, the country that received the majority of these grants was Kenya — with Nigeria, Ethiopia, and South Africa being some of the other notable destinations. In an attempt to reconcile our concerns stated at the beginning of this article, what follows is a glimpse into these four countries and some of the challenges that philanthropy faces.

Philanthropy and civil society across the world have been dealing with a growing global trend resulting in the shrinking of space for civil society. This phenomenon often manifests itself in burdensome regulations in either creating or maintaining a civil society organization, such as barriers to registering as an NGO, tedious requirements on reporting, restrictions on what type of social issues that can be addressed, and limitations or flat-out ban on receiving foreign funding. Of the aforementioned countries (Kenya, Nigeria, Ethiopia, and South Africa) there could not be a greater disparity in how they have been affected, which is why they are representative of the bigger picture.

On the restrictive end of the spectrum, we can find Ethiopia and Nigeria. In 2009, the Ethiopian government created the Proclamation to Provide for the Registration and Regulation of Charities and Societies (CSP), which was the first law in the country to regulate this sector and enacted such measures as “restrict[ing] NGOs that receive more than 10% of their financing from foreign sources from engaging in essentially all human rights and advocacy activities”. While Nigeria has a history of relative openness towards civil action (compared to Ethiopia for instance), this has recently come into question due to its stance on LGBT rights. The Same Sex Marriage (Prohibition) Act of 2014 not only makes same sex marriage illegal (up 14 years in prison), but it also provides that: “Any person or group of persons that … supports the registration, operation, and sustenance of gay clubs, societies, organizations, processions or meetings in Nigeria commits an offence …”. While so far it seems that few, if any, NGOs have been shut down because of this law, the indirect ramifications are widespread, including consistent police raids on NGOs that provide legal and HIV services, according to a Human Rights Watch report.

On the other end of the spectrum, among the countries that have not imposed further restrictions on the sector, we have Kenya and South Africa. Kenya is one of the pilot countries for the SDG Philanthropy Forum and is moving towards a more open space for civil society. As of September 10th, 2016, the Kenyan government began to implement the Public Benefit Organisations (PBO) Act (2013), which is largely seen as beneficial to civil society as it will replace the NGO Coordination Act that included regulations that could “curtail transparency and hinder registration of certain NGOs”. The new PBO Act will provide clear and indisputable means for NGO registration, in addition to limiting governmental capacity to arbitrarily shut down organizations. South Africa, historically regarded as the most open country of the region for civil action due to its history of protesting Apartheid and a more global perspective, continues its fight for the sector. This has recently manifested in civil society calling for the resignation of President Zuma and a movement aimed to increase the sector’s footprint as outlined in a report authored by the government’s National Development Agency titled “Enhancing Civil Society participation in the South African Development Agenda: The role of CSOs”.

While these details refer to only four countries, they are representative of varying attitudes towards civil society and thus provide a small snapshot of both U.S. philanthropy in Africa and the legislation that often comes at odds with ambitious development goals. Although U.S. philanthropic giving to the continent has without a doubt increased year on year, the same is not necessarily true of how open a country is to receiving these funds. This article is not the first to point out that some governments see civil society as a threat, still other governments have recognized that this funding is vital to development efforts and engaging in the global economy. Equally of note is how U.S. philanthropy has remained flexible and innovative in the face of these challenges.

Finally, another aspect that appears relevant is how the philanthropic sector in the U.S. continues to undergo a transformation to focus more on impact, a similar sentiment that has  been mirrored by African countries themselves. However, the discourse in various African regions remains geared towards associating monitoring progress and impact measurement with the business sector. Just a year ago, African leaders scolded European Union officials for proposing an “African Trust Fund” to be used in support of development activities — calling for investment and not charity. This rebuke, arguably warranted due to a perceived threat of neo-colonial tendencies, is also one that is very familiar to the larger philanthropic sector. This community has long debated, fought or even embraced the terms, buzz-words, and visions of the business sector. In case of many African countries, the latter seems to have been the direction most generally accepted. Is it because the sector is beginning to see itself in a different manner, i.e. as a business, or is it because terms like “charity” and “philanthropy” are not welcomed in many countries across the world and in Africa?

Whatever the reasoning, investment appears to be the preferred method of African leaders to achieve developmental impact as shown by various projects lately. This route has been embraced by  China, Brazil, Türkiye, and Malaysia (and many others) too that are increasingly investing in African countries.

True, charity is charity — investment is investment, and while these terms have begun to intermingle more and more (see: impact investing), the sectors which traditionally employ them remain distinct. However, it is equally true that the cross-sector focus on impact has led to a blurring of concepts. Investment has become more aligned to social issues due to a desire to have social impact; whereas philanthropy argues against being perceived as “just charity”. In other words, social investments can have charitable effects just as one’s charitable tax-deduction can be considered one of the safest investments an individual or company can make.

Whether we are discussing philanthropy or investment (or both), it is clear that the three sectors are continuing to recognize the unique advantages of the other and the importance of collaboration. For example, AGRA (the agriculture program funded by Gates and Rockefeller) does not donate food to the continent as one would think when they imagine traditional charity, instead it tailors its programs to meet the needs of smallholder farmers and engages governments, agricultural research organizations, the private sector, local NGOs, and civil society to develop solutions that improve the conditions for all involved. The most effective initiatives that philanthropy has undertaken in Africa are those that actually engage on-the-ground partners and empower the local communities to be integral players in these programs. The convening power of philanthropy and its capacity to effect change, empower local communities, and develop solutions that benefit everyone is central to its competitive advantage.

Each sector, and the instruments and methods it employs, has its time and place within the larger developmental landscape. That said, we do represent philanthropy so we are somewhat biased in favor of its approaches. The key advantages of philanthropy are that it is nimble, risk-taking, and can have a longer-term focus than other actors. The work of U.S. foundations in Africa remains one of the most talked about features of the U.S.-Africa relationship and for good reason. Despite various challenges, regulatory or otherwise, U.S. philanthropy has achieved a great deal throughout the continent and will likely continue to do so.