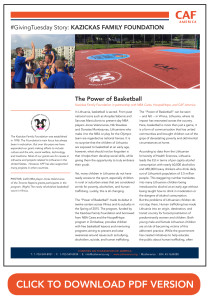 The Power of Basketball

In Lithuania, basketball is sacred. From past national icons such as Arvydas Sabonis and Sarunas Marciulionis to present day NBA players Jonas Valanciunas, Nik Stauskas and Donatas Montiejunas, Lithuanians who make it to the NBA or play for the Olympic team are regarded as national heroes. It is no surprise that the children of Lithuania are exposed to basketball at an early age, however, what should not be forgotten is that it helps them develop social skills, while giving them the opportunity to truly embrace their youth.

Yet, many children in Lithuania do not have ready access to the sport, especially children in rural or suburban areas that are considered at-risk for poverty, alcoholism, and human trafficking. Luckily, this is all changing.

The “Power of Basketball” made its debut in twelve centers across Vilnius and its suburbs in the Spring of 2015. The program, funded by the Kazickas Family Foundation and borrowed from NBA Cares and the Hoops4Hope program in Zimbabwe, provides children with free basketball lessons and mentoring programs aiming to prevent and raise awareness around issues such as bullying, alcoholism, suicide, and human trafficking.

The “Power of Basketball” can be seen — and felt — in Vilnius, Lithuania, where its impact has resonated across the country. Here, basketball is more than just a game, it is a form of communication that has united communities and brought children out of the grips of devastating poverty and detrimental circumstances at home.

According to data from the Lithuanian University of Health Sciences, Lithuania leads the EU in terms of per capita alcohol consumption with nearly 60,000 alcoholics and 450,000 heavy drinkers who drink daily out of Lithuania’s population of 3.5 million people. This staggering number translates into many Lithuanian children being introduced to alcohol at an early age without being taught how to drink in moderation or the dangers of alcohol consumption.

But the problems of Lithuanian children do not stop there. Human trafficking has made Lithuania into an origin, destination, and transit country for forced prostitution of predominantly women and children. Both young male and female Lithuanian children are at risk of becoming victims of this abhorrent practice. While the government has created initiatives to help educate the public about human trafficking, often Lithuanian children need a role model who can effectively communicate with them and whom they trust, to truly get the message across.

Furthermore, studies estimate that approximately a third of all Lithuanian children are at risk of poverty, which represents some of the highest numbers within the European Union (EU). Each day that children experience these dire circumstances is a day that they miss out on a true childhood and what many of us associate with being young: a carefree attitude, an array of friendships, and an unassailed sense of innocence.

So how can these issues be central to educating Lithuanian children but in a way that the children not only listen and learn, but also have fun and make friends in the process? The answer, of course, is basketball. The Lithuanian love for basketball makes “The Power of Basketball” a fitting program to get community involvement and to help children with the issues that they face. Basketball presents not only a needed distraction from their troubled lives, it is also a welcome opportunity for bonding, developing of friendships, and communication skills. Most importantly, they are educated in a fun and thoughtful way about how to deal with widespread alcoholism and the dangers of human traffickers. Since this is all done through sport — notably Lithuania’s favorite — the children flock to the camps and try their hardest to attend every session.

In the program’s first stage, basketball coaches all in their early twenties, focused on 200 youth (girls and boys ages 6 to 17) from high risk families. In June, a basketball court in Vilnius was refurbished and opened with a grand ceremony, which included relay races, guests of honor: Former Lithuanian basketball player and Vilnius Deputy Mayor Linas Kvedaravicius, Lithuanian Olympic champion Valdemaras Chomicius, and NBA player Jonas Valanciunas, and of course, a day full of basketball.

To continue the success of the camps, the organizers were aware from the start that they needed community buy-in and involvement for the projects to have sustainable and long-term successes. The first step to achieve this was to include the parents of the children. One of the organizers of the camp remarked, “it was amazing that not only children but also the parents took part in the games and tried to compete in teams. They all played the same games and the coach understood that the parents had also been deprived of a true childhood. That is why parents wanted to join their children with such pleasure”.

But community involvement needed to go beyond the families that were attending to truly be seen as an inclusive program. The organizers achieved this by meeting with local school and village leaders, reaching out to orphanages and community centers for people with disabilities. For future projects they are looking to involve local animal shelters, as well as professionals in various towns, such as IT workers, cooks, carpenters, and farmers with the end goal to introduce the children to possible career paths and the various opportunities they have within their own towns.

Perhaps the most telling story about “The Power of Basketball” is when one of the coaches returned to a village in September to hang posters of the program’s new sessions in the fall. He was noticed by a group of children who ran to him shouting with joy, “Coach, you kept your promise. You did come back!”. For some, it was the first time an adult kept his promise to them.

Children deserve to have the chance to embrace their youth, to play and make friends and be carefree. The “Power of Basketball” has given them this opportunity and has brought joy to the communities where it operates.