Giving the Gift of Time 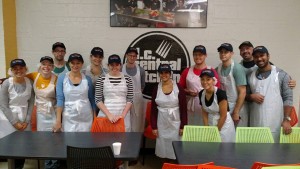 ‘Tis the season, to be thankful, to go shopping…to volunteer?

With over 60 million people in the U.S. volunteering last year, it is clear that Americans strongly believe in supporting their local communities and nonprofits. Volunteering allows us to see the important work that our local organizations are doing and to develop an appreciation for giving back. Likewise, for many charities, both large and small, volunteers are an essential part of fulfilling their mission.

One such charity is DC Central Kitchen, whose mission is “reducing hunger with recycled food, training unemployed adults for culinary careers, serving healthy school meals, and rebuilding urban food systems through social enterprise”. The organization, created in 1989, has prepared more than 27 million meals for low-income and at-risk persons throughout the District of Columbia, Northern Virginia, and parts of Maryland and has become a cultural cornerstone for residents in these areas. While the organization has the support of celebrity chefs such as José Andrés, they also rely on over 15,000 volunteers every single year, who come to prepare meals or venture to farms to pick fruits and vegetables.

What is notable about DC Central Kitchen, beyond its scope and impact, is how it uses the volunteering experience as a means to educate the residents of the nation’s capital about the various social issues that affect the city. Volunteers come to support their fellow residents and to support a worthwhile organization, but they leave with a much more in-depth understanding of what it truly means to be low-income or at-risk in a city where both wealth and poverty are prominent. Creating an empathetic experience for volunteers leads to more commitment long-term and builds a relationship between the individual and the organization.

CAF America has been volunteering as a group at DC Central Kitchen since 2013. We would like to thank them for this continued opportunity to support a truly impactful organization in our own backyard.