Home > Home News > CAF America Blog > Statistics & Trends in Philanthropy > Donor Perspectives > Generation G: The Millennials and How They Are Changing the Art of Giving

Generation G: The Millennials and How They Are Changing the Art of Giving

A great deal has been written about how Millennials fit in (or don’t) with their  Generation X and Baby Boomer co-workers. We’ve heard how they are often  pegged as being entitled and distracted, and the lengths employers go to in order  to keep them engaged. We have also seen, however, that Millennials – using the  social tools their generation has perfected – can impact politics, as well as the  economy in a profound way. With Millennials on pace to comprise  approximately three-fourths of the income earning population by 2025,[1] it’s time to start looking at how they will impact the future of global philanthropy. Baby Boomers may be the kings of kindness for now, and Gen Xers may have the finances and motivation to inherit the title, but they should watch the throne: Millennials are coming, and they will change the face of global giving!

The Old School: Boomers and Xers

It should come as no surprise that Baby Boomers (b. ~1946 – 1964) currently serve as the primary source of charitable giving, and it looks as though that trend will continue into the foreseeable future.[2] After all, the youngest Boomers are just reaching full financial stability and cementing their philanthropic goals, while older Boomers are still working, earning, and able to provide continued support to the causes they espoused in their 30s and 40s. Combine those factors with the immense size of their generation, and you can understand why people aged 49 to 67 were responsible for over 40 percent of all money donated in 2012 and 2013.[3] Boomers are also reliable, with nearly half of all donors giving to their favorite causes multiple times per year.[4] If your charitable organization is receiving the majority of its contributions from those in their 50s and 60s, then you’ll likely keep enjoying the fruits of the baby boom generation for the next decade or so. But what’s next? Most Boomers started giving during their 30s and have remained loyal to those same causes into their 60s. When looking ahead to the future of philanthropy, the younger you can engage donors, the better.

So who is Generation X (b. ~1964 – 1981)? Once the generation of grunge music and torn flannels, Xers have become a transitional group of “tweeners” – not as loud or large as the two mega generations that flank them. Now all in their 30s and 40s and rearing a generation of their own, Generation Xers have completed the shift from Alice in Chains to Alice in Wonderland. So what is on the other side of the looking glass when it comes to their philanthropic goals? Xers entered the workforce during a time of economic prosperity and have parlayed that into the same financial stability that Boomers began to experience in their 30s and 40s. Since this is also the stage in life during which many Boomers established their philanthropic goals, this is perhaps the most important time to learn how to engage Xers. Gen X is currently responsible for roughly 20% of giving, and while that may pale in comparison to the munificence of Boomers, it’s a number that is sure to grow; 18% of Gen X donors surveyed in 2012 – 2013 reported that they planned to increase the dollar amount of their charitable contributions over the next year, as compared to only 10% of Boomers.[5] Also, while Boomer donors seem to be hanging onto direct mail as their primary means of engaging with charities (40% gave via mail in 2012 – 2013), Xers’ aversion to using mail as a way to engage with charities (only 22% in 2012 – 2013) indicates that other channels may be more effective in reaching this demographic in the future.[6] In fact, 40% of Xers’ donations are made online, and that number is steadily increasing.[7] So, Gen Xers plan to increase their charitable contributions as they enjoy more financial stability, and their level of comfort with technology is such that they prefer online transactions to those performed by “snail” mail. These factors make Xers distinct from Boomers while also providing insight into the future of giving that will likely be dominated by the most intriguing group of all: the Millennials.

Millennials (b. ~1981 – 1995) may only represent about 11% of overall giving, but this generation, much like the baby boom generation that claims many Millennials’ parents, is a massive one.[8] According to projections released by the U.S. Census Bureau earlier this year, Millennials will surpass Boomers as the largest living generation with a population of 75.3 million, as compared to 74.9 million Boomers.[9] While Millennials are entering the workforce during a period of economic uncertainty and finding themselves saddled with student loan debt and underpaying jobs, they show a willingness to contribute that bodes well for the post-Boomer philanthropic world and makes their engagement a high priority in coming years.

Initial studies conducted to track the giving habits of Millennials have taught us several things about the makeup, mindset, and values of this young generation. Millennials tend to be more multicultural than Boomers and Xers, more socially accepting, and more global in their view of human civilization. This is the generation that spent its formative years with 9/11 and its aftermath, the 24 hour cable news cycle, social media, and independence movements in the developing world. Millennials consider themselves world citizens. This move toward being a truly global generation  is accompanied by a demand for greater accountability and transparency from the brands and organizations they support, and is evidenced by both Millennials’ preferred methods of giving and the causes they espouse.

According to The Millennial Impact Project, an ongoing study on Millennial engagement with social causes, a number of trends have emerged that appear to indicate what motivates this generation to give and the types of programs Millennials find appealing.[10] Most notably, the study shows that Millennials tend to begin their relationships with charitable organizations online. Organizations whose websites provide audiovisual content, offer online giving options, and display evidence of a social media presence are more likely to attract and retain younger donors. Millennials demand relevance from the organizations to whom they donate time and money, and they consider up-to-date online content to be the best indicator of relevance. Millennials are the quintessential “show me” generation – if an organization does not have transparent, tangible evidence of its success available online, then this tech-savvy generation will ignore that success. The study also shows that, unlike Boomers and Xers who value time above all, Millennials view their time as being equal in value to both money and assets. Therefore, Millennials are more likely than previous generations to volunteer their time, and will also prioritize accessible volunteer opportunities when seeking an organization with whom to engage. Moreover, since Millennials tend to view one-time volunteer opportunities as a prerequisite for an ongoing relationship, it is becoming a necessity for charitable organizations to provide such opportunities in order to engage new donors. Lastly, and perhaps most unsurprisingly, the best way to reach Millennials is through their smartphones. The Millennial Impact Project reports that 83% percent of Millennials own smartphones as of 2014, a number that is expected only to rise in coming years. As a result, Millennials respond more positively to outreach that is compatible with their mobile devices, such as emails/texts (as opposed to letters/calls) and mobile-friendly websites.

These trends demonstrate the organizational characteristics Millennials prefer when seeking to support social causes, but how do they choose to show that support? In keeping with the trend forecasted by Xers’ preference to give online, Millennials made 47% percent of their charitable contributions through websites in 2012 and 2013, a significant uptick from a mere 29% in 2010.[11] Millennials are also more likely to make a gift through a charity’s mobile app, with 62% of Millennial donors open to making gifts in this manner. Boomers and Xers are 20% and 47% likely to utilize a mobile device to give, respectively.[12] The transition from direct mail donations to online giving that occurred between the Baby Boomers and Generation X is being pushed even further by Millennials’ increased mobile giving.

In addition to mobile giving, Millennials are also more likely to give in other ways that previous generations have not, namely giving through the workplace and consumer promotions. Generally speaking, we have seen a blurring of the lines between work, home, and social life amongst Millennials, and charitable giving – once a very private activity – has not been immune to that trend. In 2012 and 2013 roughly 60% of millennial donors gave to charity through workplace sponsored payroll deduction plans, as compared to 53% of Xers and 46% of Boomers.[13] Millennials’ openness to increased workplace camaraderie and friendship may fuel this behavior, resulting in a positive peer pressure to contribute in tandem with one’s employer and co-workers. Also, in keeping with the Millennials’ demand for greater transparency from charitable organizations, they may be more inclined to trust a cause championed by their employer than one they learned of through unsolicited mailings or email.

Donations made through checkout “add-ons” or brand promotions while purchasing consumer goods may be appealing to Millennials for similar reasons. Millennials likely look at such gifts as a way to offset the inherent aspect of self-interest that comes along with consumerism, compelling more young consumers to say yes to a checkout add-on or seek out a product or brand that shares its proceeds with charity. Additionally, if the marketplaces that Millennials shop in and the brands they swear by endorse particular causes or charitable organizations, that good will is seemingly transferred and the element of transparency satisfied. In other words, if Millennials put their trust in a brand, they are more likely to support charitable causes adopted by that brand. As a result, an estimated 53% of millennial donors engaged in retail giving in 2012 – 2013, as opposed to only 36% of Boomers.[14] Even though retail and corporate partnerships may not be the best way to build sustainable donor relationships with Xers and Boomers, it may be one of the most effective ways to plant seeds with Millennials who seem poised to overtake Boomers as the largest donors in the relatively near future.

While Baby Boomers may be the most reliable and Generation Xers may have displayed the steadiest  growth, Millennials represent the future of philanthropy. Understanding the methods and motivations employed by this group and converting that into a successful fundraising plan will be the key to fostering a healthy donor base for years to come.

[1]    Millennial vs. Baby Boomers: Who Would You Rather Hire? http://business.time.com/2012/03/29/Millennials -vs-baby-boomers-who-would-you-rather-hire/ 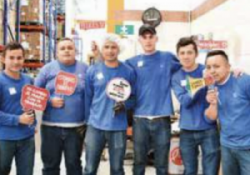