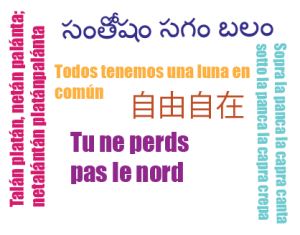 Perhaps more than ever before, there is a push across the world to preserve some of the 6,000 languages that exist on our planet. This goal is not free of challenge however, as according to the BBC, over 90% of these languages are spoken by only 100,000 people or less. With the rise of English as the pseudo global language due to the internet, as well as its designation as the common language of multicultural workplaces and international schools —  the world is poised to lose some of the diversity in how it communicates.

At CAF America, we speak thirteen different languages from English to Mandarin, Telugu, and Khmer. While English is our common language, occasionally you can hear vibrant discussions in Hungarian and Spanish or the occasional greeting in French or Italian. Language is at the center of human activity, self-expression and identity,  and at our office, we have the opportunity to utilize our proficiencies for both conversations with coworkers, as well as in our actual job responsibilities. But what if we no longer had the option to explore different avenues of communication and expression?

UNESCO has identified 2,500 languages which it says are at risk of extinction. The only way to preserve these languages is to pass them on to younger generations. With an indigenous language dying out at a rate of one language every two weeks, native speakers are creating renewed efforts to preserve their mother tongues. While Asia alone has over 2,200 languages out of the over 6,000 in the world, this phenomenon is occurring in our own backyard.

Not surprisingly, for many first generation immigrants to the United States being “American” is to speak English, and that’s what they’ve taught their children. This trend was increasingly noticeable after World War II when, understandably, many Japanese Americans encouraged their children to speak only English. Similar attitudes have been noted in Korean, Indian, and Chinese families. More recently, while the reasoning might no longer be the desire to integrate or avoid prosecution, the trend continues, slowly eroding the cultural heritage of their native lands.

Perhaps as a response to the increasingly global world, a fairly new and celebrated movement has emerged with newer generations of immigrants or world citizens that want to preserve or reconnect with their native culture and language. Some languages that seemed to be close to extinction are slowly making comebacks. In Hawaii, we are witnessing perhaps one of the most successful attempts to preserve the mother language, besides the efforts taken in New Zealand to maintain Maori language and culture. Hawaii has successfully managed to make it “cool” to speak the native language, “in middle of the last century there were perhaps 30 speakers under the age of 18. But […] there was ‘a cultural renaissance’ in the late 1970s and early 1980s, and now schools are educating 3,000 students a year in Hawaiian”. Today, younger Hawaiians, proud of their culture, are preserving the language themselves by using it on social media and for quick communication through texting.

This same initiative aiming to make the mother language “cool” is being taken in Native American societies as well. For Cherokees, technology has been invaluable to preserving their language. While only 8,000 out of 290,000 Cherokee speak the language today (they are mostly senior citizens), a movement in 2012 led to Google making its software and phones compatible with Cherokee syllabary, which has led younger Cherokees to increasingly embrace their culture and speak their language.

Technology and the internet may be responsible for the enhanced use of the English language, companies like Google, Apple, and Microsoft have made an effort to start adding functions to your smartphone, similar to what they have done for Cherokee. But as you might have noticed, you don’t have the option to convert your keyboard to 6,000 languages — closer to 75 (depending on your phone). It’s not just your keyboard, it’s Google Translate, search engines, instructions for using programs, and even your spell check software. Unfortunately, as Google has said before, the sky is not the limit, and there is no feasible way for our current technology to support 6,000 languages.

While technology can perhaps contribute to saving many of the world’s endangered languages, it alone can’t save them all. Languages such as Nyungar, used by some aboriginal communities in Australia, has no written tradition being passed only through oral communication, which negates any benefit that technology may be able to offer. Furthermore, many speakers of Nyungar have minimal access to technology, smartphones, or the internet. How, then, do we save such languages? While governments like New Zealand’s has been successful in preservation efforts, it will also be up to the communities, families, and individuals to find ways to preserve their language. Charities and nonprofits could play a role in facilitating this by engaging  communities to enact meaningful and effective programs that seek to preserve such languages.

A grantee of CAF America, Serpentine Galleries, recently hosted a forum of writers, artists, filmmakers, scientists, architects, and musicians to discuss “extinction”. The Marathon Series, their annual meeting, led to creative discussions about the extinction of languages and how awareness can be brought to this important issue via innovative mediums.

The situation is significantly different, however, when the use of minority languages in public administration is considered. In many countries, recognizing and admitting minority languages in public affairs has been and continues to remain the epicenter of heated debates. This issue is oftentimes the main source of conflict between the various minorities and the majority population, and it affects a wide range of countries from the most developed to the developing world. Just recently, in Romania — a member state of the European Union – the lower house (Chamber of Deputies) tacitly adopted a bill that would outlaw the use of minority languages in public administration. The bill also prohibits the use of multilingual street signs, and goes as far as proposing termination of employment for those public officials who do not comply with the linguistic limitations it imposes.

As International Mother Language Day approaches on February 21st, it’s important to recognize the importance of language in one’s preservation of identity, equality and nondiscrimination, along with celebrating diversity. We encourage everyone to do some self-assessment and support the avenues of preservation, whatever form it may take, from policies to technology, it all matters.

We at CAF America conducted an internal survey to see how many languages our staff spoke and to learn what people are doing to preserve their mother tongue. While the grand majority of our office claims English as their mother language, they also recognize that learning other languages is extremely helpful in today’s interconnected society. With 11% of our staff knowing six languages and nearly 40% knowing three, we – as a collective –  are convinced that the more languages you know, the more colorful you perceive the world to be. All non-native English speakers among us are either actively using or trying to preserve their mother language. Admittedly, this is not a challenge free task with our office being located in a predominantly English speaking country and with English as our working language.

Nearly everyone said that learning the language of the country you’re based in or relocate to for a given time is next to essential to truly connect with that culture. Though we represent only thirteen of the world’s 6,000 languages, there seems to be a common belief that, as Nelson Mandela said, “if you talk to a man in a language he understands, that goes to his head. If you talk to him in his own language, that goes to his heart”.