A publication of Charities Aid Foundation

CAF’s WGI is unique in that it considers factors that are not directly correlated with a certain country’s economic development or standard of living index, but have relevance in determining the attitude towards charitable giving on an individual basis. It is interesting to note that traditional or religious customs may affect the rankings of countries more so than economic prosperity. Thus, countries where for example the population largely follows the Theravada school of Buddhism — which encourages charitable giving — were found to rank higher on the WGI than countries that are far more prosperous in purely economic terms. 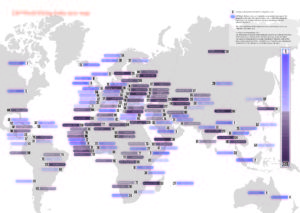 To read more about the World Giving Index and see previous issues, follow this link.

The coronavirus pandemic is unlike any outbreak we’ve experienced in modern times in terms of its geographic reach. Yet, many organizations are effectively applying the lessons learned from past epidemics to address the ravaging effects of the disease. Among them is the international NGO EMERGENCY and its affiliate, EMERGENCY USA, which supports the organization through… CONTINUE READING >>