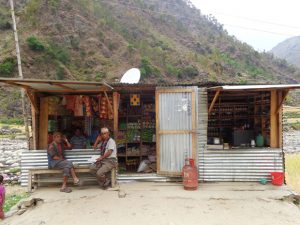 Imagine you live in a region of the world that is so remote that you’ve never seen, let alone heard of, a bank. You have very little opportunity to make a living, through no fault of your own. The concepts of self-starter, entrepreneur or business owner might not be completely foreign to you, however, without a mentor and without access to loans it can be next to impossible to engage in any valid effort to better your financial situation. This becomes all the more difficult when you live in some of the highest and most remote regions of the world.

The above scenario describes a significant size of the population of Nepal, where “access to commercial banks is very low, at almost 27% of rural households”. Ranking at 145 out of 188 in the United Nations 2015 Human Development Report, Nepal is one of the poorest countries in the world — a situation that has been exacerbated by the April 2015 Gorkha earthquake. While the country received over a billion dollars in aid after the earthquake, such funds expended in recovery efforts rarely address the root causes of poverty. Recognizing that Nepal, especially its citizens dwelling in the hill and mountain regions, needed more than just disaster relief funding, non-governmental organizations (NGOs) have been actively seeking solutions to alleviating Nepal’s poverty levels by providing substitutes for its lack of financial institutions.

Enter Samriddha Pahad UK, an organization that aims to bridge this financial gap in Nepal, specifically targeting the hill and mountain communities with the goal of providing financial services and training to these underserved people. Samriddha Pahad, translating into “prosperous mountains”, is a UK-based organization that has been operating as an international NGO in Nepal since 2010. Its four main focus areas are: (1) access to finance, (2) private sector development, (3) improved living standards, and (4) institutional strengthening. While results can be measured based on a multitude of factors, the organization’s true successes are best represented by the very people that it has helped lift out of poverty.

Of these people, Samriddha Pahad UK more specifically encourages women to take advantage of their services and to attend financial literacy trainings. One such case is that of Manisha Poudel, who was married and had a child at 15, and therefore never received a true education. With the support of her husband, Manisha sought out assistance from one of Samriddha Pahad’s programs and received a loan to open a restaurant. She hopes that her restaurant will be a gathering place for her community and will provide them with better food than they would make at home. Seeing her personal drive to be both the manager and the chef at the restaurant, her husband and family rallied to her side. She one day hopes to expand it to Kathmandu, the capital of Nepal. She hopes to be joining a string of successful women-entrepreneurs such as Menuka, a 30-year old grocery store owner, who was able to use Samriddha Pahad’s programs and loans to skirt her middleman and buy her products wholesale. With these extra funds, Menuka has been able to expand her store to include a restaurant and cut down on costs.

To date, not a single person / cooperative has defaulted on a loan that has been facilitated from Samriddha Pahad UK. With the combined power of effective financial literacy training and the willpower of the hill and mountain communities, all signs point to better financial integration of these regions and a hope that Nepal will continue to climb its way out of poverty.