Charity in the Checkout Line 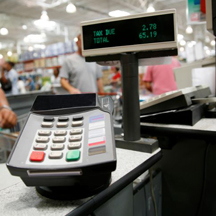 As the holiday season hits its full stride and a new year looms on the horizon, many consumers watch the dollars fly out of their wallets as quickly as the calendar counts down the remaining days of 2015. Many of us even begin this sprint before we’ve had the chance to recover after our Thanksgiving feast – heading straight to the local mall or big box store on a quest to find the perfect gifts for our loved ones. Though this rush on retailers is indicative of a willingness to shower friends and family with generosity, even the most philanthropic patrons can be distracted from their giving habits during what is often both a joyful and stressful time. In recent years, many retailers have picked up on this trend and now offer consumers the opportunity to give while getting. Charity at checkout, i.e. being asked by a retailer to contribute to a cause or organization as part of one’s purchase, now seems nearly universal.  As a result, many of us have been asked to give – but how well do these programs work?

A recent study conducted by the Good Scout Group found that 71% of consumers surveyed have participated in a charity at checkout program. This success rate has ensured that, despite the fact that 66% of donors give less than $2, such programs can still raise an incredibly impactful amount of money. In their most recent exploration of point of sale donations, the Cause Marketing Forum found that the 63 largest corporations who participated in these campaigns raised $358 million in 2012. There are promising signs in the Good Scout Group’s study that this figure can continue to grow. Of respondents who recall the last charity they supported at the register 79% felt more positively about that charity, a strong indication that they would be likely to support that organization again in the future. Additionally, 60% of consumers felt more positively about retailers who participated in such programs, making them more likely to remain loyal to those brands moving forward. Charity in the checkout line presents itself as a win-win for both charities and retail corporations.

Another reason to believe in the sustainability of consumer giving programs is the currently shifting generational balance. Earlier this year it was reported Millennials now represent the largest percentage of the workforce in the U.S. Millennials also represent more than 25% of the entire U.S. population, surpassing Baby Boomers by a figure of roughly 10 million. Thus far, this generation has demonstrated a propensity to be more generous than its predecessors, placing great importance on corporate transparency, brand loyalty, and standing amongst peers. Not surprisingly, 74% of Millennials have made donations at checkout, surpassing both Generation X and the Baby Boomers. Perhaps more importantly, 83% of Millennials felt more positively toward the charity they supported, and 68% had a better opinion of the retailer after giving. Some mega-retailers have already begun the process of tailoring their charity at checkout programs even more finely to Millennials’ shopping and giving habits.

In 2013 Amazon rolled out “AmazonSmile” which automatically donates 0.5% of one’s purchase price at checkout to the consumer’s choice of the nearly 1 million charitable organizations with whom Amazon partners. Unlike most charity at checkout programs, AmazonSmile does not add any additional cost to your shopping cart, meaning that one is simply doing good by holiday shopping through the AmazonSmile portal. Millennials are already more likely to do their shopping online as compared to their generational counterparts, in addition to doing about 50% of their giving online. As a result, programs like AmazonSmile represent the next phase in the evolution of charity in the checkout line and, more broadly, corporate giving programs in general.

Charity at checkout programs represent a way for retailers to better engage with consumers who are increasingly more attuned to the good will particular brands foster. Charitable organizations that partner with such retailers reap a direct benefit through the increase in donations, but also enjoy the long-term boon of growth in the positivity associated with their name and mission. The pressure to engage in hyper consumerism can turn the holiday season into a hectic experience, but programs like these ensure that waiting in line for that hot new item can be a very rewarding experience as well.