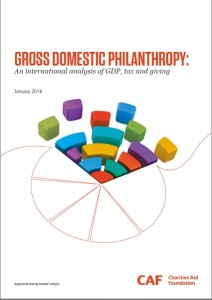 Out of 24 countries representing 75% of the world’s GDP, the U.S. has ranked #1 in generosity.  A recent paper published by Charities Aid Foundation — Gross Domestic Philanthropy: An international analysis of GDP, tax and giving –– looked at data provided by the selected countries to determine whether a correlation existed between GDP growth and tax rates, and amounts given for charitable purposes by individuals within their countries.

Aiming to update findings previously published by CAF in 2006 around international comparisons of charitable giving, the paper provides an analysis of the relationship between GDP, tax and giving within the 24 participating countries and will hopefully stimulate further discussion and a better understanding of this important issue.

Some of the key findings to be noted:

To learn more about trends in philanthropic giving access the full report here.